Microsoft’s Azure Cloud was elevated to a secondary ‘Leaders’ status, up from its ‘Visionary’ status last year

Gartner believes that cloud compute Infrastructure as a service (IaaS) is still maturing and rapidly evolving and it sees AWS as the leading vendor in this space in the early 2015 period.

While Azure is still a distant second to AWS in terms of market share, it is far ahead of its other competitors.

Gartner on AWS: “It is the overwhelming market share leader, with more than five times the cloud IaaS compute capacity in use than the aggregate total of the other 14 providers in this Magic Quadrant.”

In a detailed 50-page report (Read below) , Gartner heaped praise on AWS, highlighting its diverse customer base, aggressive pricing strategy, and the broadest range of use-cases, including enterprise and mission-critical applications.

“It has the richest array of IaaS features and PaaS-like capabilities, and continues to rapidly expand its service offerings. It is the provider most commonly chosen for strategic adoption.”

While AWS, as an early mover, has several years of competitive advantage, it is expected to face significant competition from Microsoft in the traditional business market and from Google in the cloud-native market.

According to the report, Microsoft’s Azure cloud service is already making significant inroads despite the fact that it only launched the IaaS component of its business into general availability a little over a year ago. 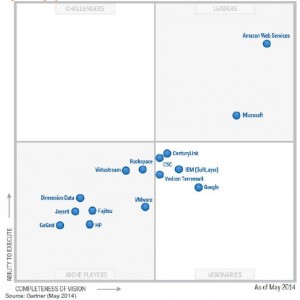 Rackspace on the other hand took a step backwards, relegated to ‘Niche’ status.

Gartner’s take on Microsoft Azure: “Its vision is global, and it is aggressively expanding into multiple international markets.”

Computer Science Corp (CSC) fell out of the ‘Leader’ quadrant and moved down into the busy Visionaries quadrant to join Google, IBM/SoftLayer, CenturyLink and Verizon Terremark.

According to Gartner, these five providers are in the middle of reinventing themselves and will most likely battle it out for the number three spot in the market. 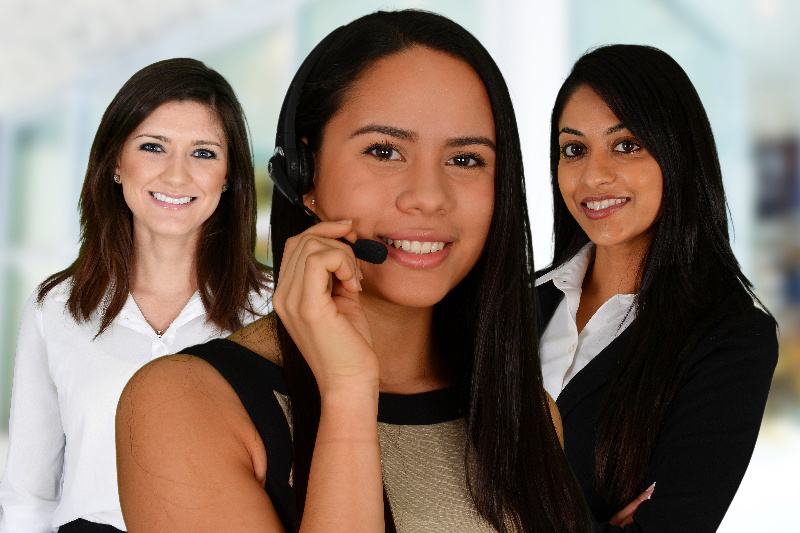 According to a recently released Everest Group study, the global contact centre spend now exceeds over $300 Billion dollars, with outsourcing accounting for 1/5 of that total. The contact centre outsourcing market is maturing, but there is still steady growth exceeding 7%, driven not by labour arbitrage, but now more sophisticated buy-side and customer experience executives are looking at business outcomes, and adapting non-voice channels and social media to build and retain competitive advantages.

According to Information Services Group (ISG), the outsourcing industry in EMEA is on the up and is set to achieve one of its strongest years in a decade.

According to Information Services Group (ISG), the outsourcing industry in EMEA is on the up and is set to achieve one of its strongest years in a decade.

“The EMEA market presents a very encouraging picture so far in 2014, and the level of activity underway leaves us optimistic for the rest of the year,” said John Keppel, partner and president, ISG. “Indeed, 2014 could end up being one of the strongest – if not the strongest – years in a decade.”

There is also evidence that outsourcing is no longer a Northern European phenomenon, as more outsourcing activity spreads across the continent. Due to increased activity in Spain and Italy, Southern Europe saw ACV reach a record €0.74bn.

ACV in France for the first three quarters reached more than €1bn, an increase of more than 250 percent on the same period in 2013 while UK values and contract numbers did not quite reach 2013’s third-quarter results despite both ACV and contract counts increasing substantially quarter-on-quarter, up 120% and 48%, respectively.

“The impressive performance of less mature markets, especially France and Southern Europe, is yet another reason to be optimistic about the market moving forward.

Across EMEA, third-quarter Information Technology Outsourcing (ITO) ACV rose nearly 15% for the first three quarters of 2014 compared with the same period in 2013, while the volume of ITO contracting in EMEA hit a record high, up 16%.

“Business in the Eastern European region are being recognised as ITO Technology skills and outsource contracts increase too”, says Craig Ashmole IT Consulting Director at London based CCServe Limited. “Contracts in the Financial Services and Travel sectors being awarded in the latter half of 2014.”

“We forecasted that, following the robust first half, the third quarter would see a pause in activity for the region and that has been the case,” said Keppel. “We believe this pause is temporary and expect to see both deal activity and values picking up again in the fourth quarter.”