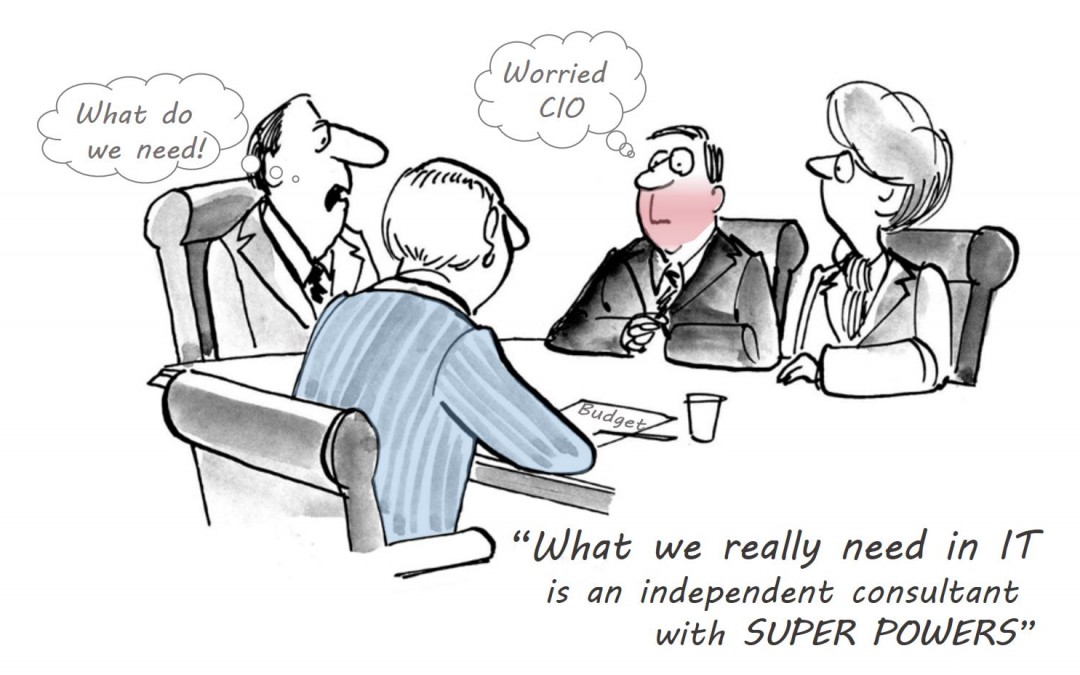 Taking charge of a programme by an interim for what’s considered a short period of time doesn’t mean the Interim can’t make a big impact to an organisation.

Full-time positions allow CIOs to get their teeth sunk into an organisation and to lead an IT-enabled business transformation but not every CIO, is a permanent role. Then bodes the question; Why should technology chiefs consider utilising interim positions and what benefits do they gain from these temporary roles?

1. Dive into challenges that are inaccessible to full-time CIOs

Reading an interesting blog from Chris Chandler, head of the CIO practice at recruitment specialist La Fosse Associates, who is a big advocate for the interim CIO role. He says that, in some instances, taking a temporary position can allow a CIO to design and deliver what they deem to be the optimal IT structure for the business.

“Such interims are often free from the politics that can restrain their full-time counterparts,” says Chandler. “Operating without such constraints can be wholly liberating for CIOs and often leads to more radical IT transformations.”

A word of caution however is to not use a transformational interim CIO to focus on BAU (business as usual) activities which often require them to conform to the status-quo of the organisation. The interim in these circumstances consequentially has limited, or no, freedom to follow his or her natural change or transformation instincts and capabilities.

Chandler goes on to say, “Experience from the recruitment industry suggests that, generally speaking, organisations are increasingly industry-agnostic when it comes to appointing interim CIOs”.

Therefore, aside from the obvious over qualified capabilities that often accompany interim positions, these appointments can offer CIOs the opportunity to dive into new sectors and challenges that would not be accessible to their permanent counterparts.

2. Treat the interim position as access to valuable learning experiences

One of the biggest benefits to any company taking advantage of bringing an Interim into their Change programmes is the multi-company experience that they bring – having the opportunity to engage in so many differing corporate environments brings skills you cannot get in the short term working in one company.

The requirements of one interim placement to the next also have extensive varying elements and this sharpens another skill within Interims and that’s complacency – they are always in a new environment having to look at the situation that they are immediately in front of so no time to sit back and relax. Interims are dedicated to finding resolution to business problems quickly, to mitigate costs, and to drive change to the company.

“In a recent assignment I was engaged with, the company was on the verge of signing a contract with a global Outsource supplier and they wanted someone to come in and give them a second opinion,” states Craig Ashmole, Founding Partner of London-based IT Consulting CCServe. “I came in, assessed the geo-markets, built an ROI business case and recommended an alternative solution that presented more than $20million savings over a 5-year period”.

In total, Ashmole spent five months building the business case, gathering all the BI data to put together a report for the board. He advised that certain geo-markets were easy to follow into from an outsourcing perspective, but that other considerations like Customer Service levels and access for company directors to keep close to the Centre of Excellence were quite different to what was initially thought.

“My job was to provide the company with a viable compelling strategy,” says Ashmole. “The strategy demonstrated that the global market knowledge he brought to the table opened up other avenues not previously thought of. The Board agreed with the strategy, signed it off and he was then asked to remain for an additional 13 months to implement, and manage the transition of a 700 seat Shared Services centre.”

3. Make a difference and avoid the strain of corporate politics

The interim role provides benefits in a range of key areas. First, being temporary provides an escape route from the swamp of organisational politics all companies own. You will be surprised just what you can learn and then fix when you have a perspective from outside the organisation, whilst also performing a key role within it.

One of the key skills Interims develop is to look beyond the corporate politics that every company has and to in fact get to understand quickly ‘who wants what done, and who does not’. This then builds a strategy path for the Interim to manage the respective individuals so as to get the best out of them and also to achieve the goals of the assignment.

Interims have the natural opportunity to make a big difference, without being seen as a threat to entrenched operational territories and empires. Interim often use this political awareness as an opportunity to forge alliances across the organisation, and to deliver results directly through brokering and partnership of executives whom may all have differing agendas. These are skills a good interim will possess if they have the experience of engaging across multiple businesses and one you cannot learn from a classroom.

Interim CIOs can become a change catalyst by delivering quick and highly visible results that map directly to their contract objectives. Unlike some permanent positions, interims are often given short-term targets and are presented with the entirely realistic prospect of leaving an important legacy behind.

CIOs run highly technical disciplines and usually come from technical backgrounds. Their strength is in knowing the details of IT work. This gains them respect in the eyes of their staff and enables them to use projects to drive improvement. Nevertheless, IT management responsibilities have changed substantially over the past few years. As more IT processes become automated, CIOs must become more business-savvy. CIOs also need strong people, as well as good communication and other soft skills. In this new world, CIOs must embrace new roles and skills as markets change.

Interim skills are often used as a means to this end as a quick injection of high visibility change or transformation especially where a CIO has brought an interim in to assess areas of skill shortage or to drive a particular change element.