Warning: The magic method HM\BackUpWordPress\Extensions::__wakeup() must have public visibility in /homepages/42/d369927078/htdocs/CHAT/wp-content/plugins/backupwordpress/classes/class-extensions.php on line 35
 Cloud Complexity - CIOstraightalk

Is Cloud complexity still hiding behind a pretty face?

The interesting relevation of what Cloud adopters feel and the approach that those are taking to get cloud services, under their belts, within the CIO Office.

Reading the November issue of Comupting.co.uk there was a survey that they conducted on 130 IT decision makers ranging from CIOs to system specialists and Programme Directors where 76 per cent said that their organisation was deploying Cloud services, with the largest portion indicating that their current deployment strategy was a step on a journey towards a much wider adoption. Great news then that Cloud is being deployed in earnest which is better than most actually openly state in events and seminars.

“The cycle I am seeing in the market and during Advisory assignments I have engaged in, shows that Technology facilitates business change, which in turn spurs new technologies, ” comments Craig Ashmole, Founding Partner of London-based IT Consulting CCServe.

The self-perpetuating whirlwind of change was the factor underlying many of the reasons given for cloud adoption, with flexibility the main driver and cost benefits and scalability coming next as seen in figure 2 below. It’s not all about external factors as one of the growing themes in cloud deployment is unlocking internal talent and ideas, is a goal for more than a quarter of the respondents in the survey.

Amongst the negatives in the cloud survey, was security (mentioned by nearly 55 per cent) and cost control (15 per cent). Clearly the argument by cloud vendors that their infrastructure is more secure is still viewed by scepticism, especially after recent well-publicised events like the UK’s mobile giant – TalkTalk.

In summary then, customers are looking for cloud-based solutions to increase flexibility and agility, to enable them to scale and to cut costs while boosting collaboration. However, they are worried about security implications of trusting sensitive data to cloud providers and sensitive to the need to control costs, essential when spinning up a server.

When Computing asked in the survey what were the skills that were sort after to manage the new world, the answers fit in neatly with business-focused goals like, Negotiation/Contract skills, Security, Understanding the Business, Regulatory, Cost Control, Evolving Technology Awareness. None of these skills were core technology focussed really but rather a more commercial savvy approach to the market which was interesting.

The most favoured architecture for cloud deployments, particularly in highly regulated industries or for those that require high-speed processing plus flexibility and scalability was Hybrid Cloud. This involves integrating both public and private cloud and private virtual on-premises environments, generally running on hardware supplied by different vendors.

Ignoring the skills gap is an issue, given the changing landscape, there is a growing strategic importance of cloud-related knowledge from a business awareness perspective. Among those that have adopted or are adopting cloud-based services only 24 per cent have a training plan in place, with almost half saying they have no such scheme and no plans in place to implement one, a remarkably low figure given the importance of cloud services as we go ahead. 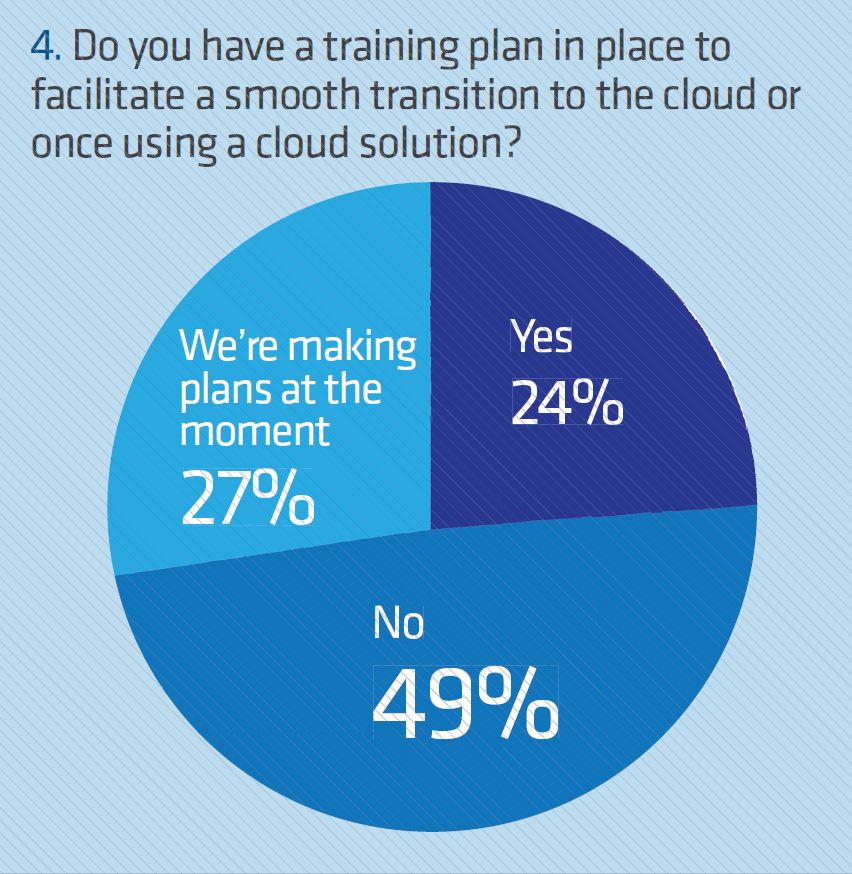 The lack of Training programmes could be a result of the low self-service nature of many cloud services, it could be that cloud is being adopted in a piecemeal rather than strategic fashion; or it may be that many of those responsible underestimate the complexities of rolling out an integrated cloud infrastructure and achieving a healthy return on investment. The view of John Leonard from Computing was that it might be a result of those falling for the promises of the pretty face of the emerging cloud providers.